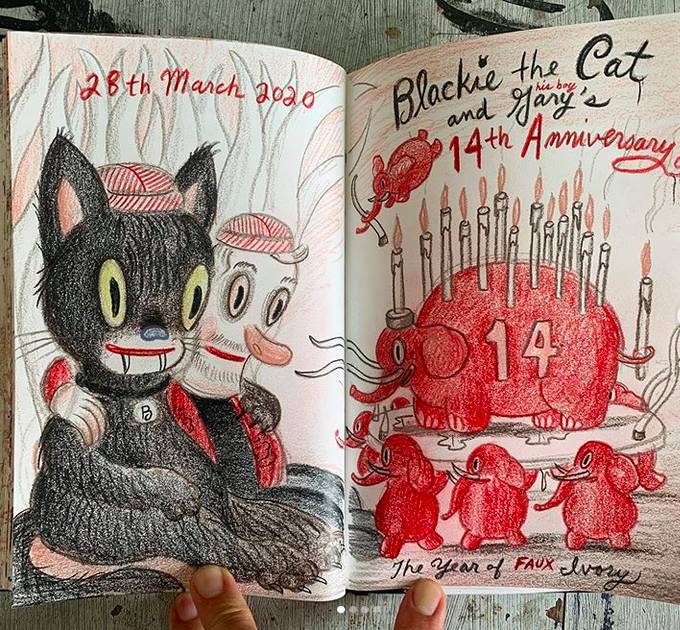 Did you catch this Instagram’s post? March 28th was the 14th anniversary and the date that commemorates the moment when Blackie the Cat adopted artist Gary Baseman. Ever since, Blackie the Cat has been Baseman’s inseparable companion and a continuous inspiration for Baseman’s most recent projects, including The Purr Room, presented for the first time at The Other Art Fair in Los Angeles in 2018; an upcoming book telling the story of Blackie and the Red Elifants as well as the Blackie the Cat Show. The ongoing series of conversations between Blackie the Cat and Baseman are followed by hundreds of people who, like Gary, also love and need the power of Blackie the Cat’s purr.

During the few last months, due to Blackie the Cat’s fragile health, Gary has been devoting most of his time to taking care of his long-time friend. He’s also been exploring through drawings and other art forms the ways that Blackie the Cat’s healing powers have helped him to successfully deal with the bittersweetness of life.

Click here and check out this sketchbook section dedicated to Blackie the Cat and don’t forget to follow the story of these two pals on social media via Gary Baseman’s Instagram stories. You might appreciate the healing power of Blackie’s purr during these challenging times!

THE BUCKINGHAM WARRIOR! Seven years ago, my writin

100,000. Unfortunately, the US has reached another

POWER OF PURR PRINTS! We still have a few of these

Remembering those men and women who sacrificed the

Happy Caturday. Especially during this pandemic an

PURR ROOM PRINTS! We still have a few sets of 3 le

Little Miss Muffet sat on her tuffet, having her